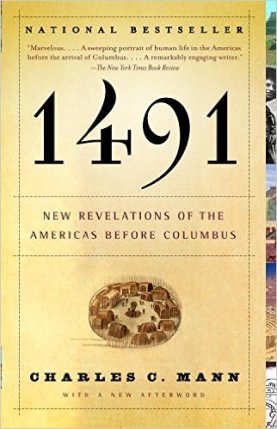 I wouldn’t normally use my blog for a ‘book report,’ but every now and then comes a book that demands to be shared. One such book is 1491: New Revelations of the Americas before Columbus. Author Charles C. Mann has managed to upend the mainstream Euro-American version of history.

Most of us recognize that Columbus didn’t actually ‘discover’ anything, since the first peoples of the Americas obviously knew all about the existence of these continents. It’s also probable that other eastern hemisphere travelers beat Columbus to American shores. But what most of us don’t know is that the Americas were truly a ‘happening place’ long before Columbus arrived.

This book reminds me of the paradigm-busting that Jesus Christ does in the biblical ‘sermon on the mount.’* You know, this is the part where Jesus challenges the conventional beliefs of his culture by saying:

Charles C. Mann doesn’t claim any divine authority. He doesn’t even claim 100% factual correctness. Even so, the effect on Euro-American readers is similarly mind-blowing. Mann compares and synthesizes a big range of research findings. Research is messy, so there is plenty of controversy – but the emerging evidence points to a history that is very different from what we usually hear.  Here’s my own unofficial sample of what’s offer:

You have heard accounts of American history that begin with the arrival of the Europeans. But research tells us that the first peoples of the Americas were already busy creating diverse, vibrant civilizations, full of political intrigue, economic innovation and constant social change.

You have heard that agriculture was invented in the Middle East, and that this was the key to human development. But research tells us that agriculture was also invented more or less simultaneously in Mesoamerica. The development of maize (corn) was an amazing feat of genetic engineering. One researcher estimates that 3/5 of the world’s cultivated crops were developed first in Mesoamerica.**

You have heard that some Pilgrims to New England received survival help from Native Americans who were ‘friendly.’ And maybe they were friendly. But research also suggests that these Native Americans were seeking to maneuver the Pilgrims to their own advantage in a sophisticated power play against rival nearby confederacies. In other words, they had their own complex political systems, already in progress.

You have heard that the Native Americans lost the above gamble because the Europeans had better weapons. But research now tells because the Europeans brought with them a smallpox pandemic that swept death across the Americas. One higher-end estimate suggests that smallpox killed 95% of the western hemisphere’s population.*** Hmm, no wonder the Europeans came out on top.

You have heard that the Americas were sparsely populated. But research now indicates that there were likely between 40 – 100 million people in the Americas when Columbus showed up.**** Mesoamerica and South America had hosted many large and densely populated cities. The Norte Chico civilization in the Andes was highly urbanized as early as 3000 B.C.

You probably learned in school that evidence of human habitation in the Americas goes back about 11,000 years. But research now tells us that the first peoples have probably been here for at least 20 – 30,000 years.***** It seems to me that this research is beginning to sound similar to some native peoples’ accounts, which state that they have been here since the beginning of time.

You have heard that Native Americans ‘lived lightly on the land,’ making scarcely any impact on the natural environment. And research tells us that in some cases, that was true. In other cases, it was utterly false. It now looks like the entire Amazon region may have been carefully cultivated and landscaped by its Native American inhabitants.

I could go on, but instead I urge you to grab a copy of the book and read 1491 for yourself. You may or may not agree with all the details, but I guarantee your perceptions will be stretched. It’s time for all of us in the Americas to ‘rediscover’ the myth of Columbus.

*The Gospel According to Matthew, Chapter 5 (TNIV)